If you decide to relax in Sozopol, you will need private airport transfer. Book transfer from Burgas airport or Varna airport to Sozopol in advance. We offer airport transfer Sozopol for any company at the best prices.

Why to book transfer Sozopol with Iksam:

What we know about Sozopol: 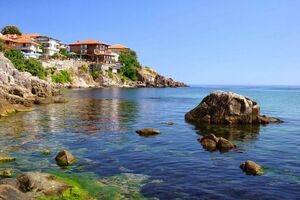 Sozopol is a famous resort in the southern part of the Black Sea coast of Bulgaria. It is the administrative center of the Sozopol community, which is part of the Burgas region. The distance from Sozopol to Burgas is 34 km, to Nessebar – 67 km, to Sunny Beach – 69 km, to Varna – 150 km. Sozopol is divided into two parts: the Old (the historical part, declared an architectural reserve) and the New Town, where the bulk of the hotels are concentrated. These two parts are separated by a park and a beach.

Tourists can engage in various sports – jet skiing, surfing, playing beach volleyball, boating, fishing. To the south of this is the Ropotamo Nature Reserve, covering the mouth of the river of the same name. There you can enjoy trip on different vessels along the river, watching interesting species of birds and plants.