Your vacation is over and you have to go home? Do not forget to book private Taxi from Bansko to Varna airport in advance. We can provide you with a private transfer service directly to your address and transport with new, comfortable cars and professional drivers from Bansko to Varna for any company at the best prices.

Why to book private Taxi from Bansko to Varna with Iksam:

Why is a private airport transfer from Bansko to Varna a better choice than a shuttle, taxi or public transport?

When you book return airport Taxi from Bansko with Iksam Travel, our driver will be waiting for you in front of your hotel, he will help you with the luggage and drive directly to your address in Varna. You do not need to wait for anyone and worry that you will be late for your flight, as happens with a shuttle transfer. Also you can stop for refreshments on the way.

There is no need to hurry to the station so as not to miss the bus from Bansko to Varna or to wonder which taxi to take in order for the driver to be reliable. We provide you transportation from Bansko to Varna airport with new and comfortable vehicles. Our drivers are English-speaking, experienced, professional, punctual and courteous. 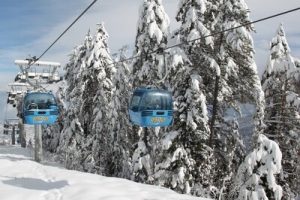 One of the most popular winter resorts among fans of ski sports and snowboarding is Bansko. It is located at the foot of the Pirin Mountains. At an altitude of 925 m above sea level. From a small town in recent years, Bansko has become one of the leading ski resorts in Europe. The total length of trails about 75 km, the longest 16 km. There is a night ski trail, and in the winter in the city is opened a skating rink. In recent years Bansko hosts competitions of world and European cups in skiing and biathlon.

How far is Varna to Bansko ?

Varna Airport is about 525 km from Bansko .
Check the exact distance and time from Bansko to Varna.

How do I get from Bansko to Varna?

There are several options how to get from Bansko to Varna:

How long is transfer from Bansko to Varna?

Transfer time from Bansko to Varna airport is about 6, 5 hours. The time can vary depending on the traffic on the roads.