Plan a winter holiday in Bansko ski resort? Do not forget to book Bansko Transfer in advance. We offer taxi service from Bansko to all Bulgaria airports for any company.

Why to book Bansko Transfer with Iksam:

What we know about Bansko: 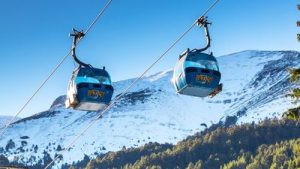 One of the most popular winter resorts among fans of ski sports and snowboarding – Bansko. It is located at the foot of the Pirin Mountains. At an altitude of 925 m above sea level. From a small town in recent years, Bansko has become one of the leading ski resorts in Europe. The total length of trails about 75 km, the longest 16 km. There is a night ski trail, and in the winter in the city is opened a skating rink. In recent years Bansko hosts competitions of world and European cups in skiing and biathlon.

How to get to Bansko

Nearest airport to Bansko is Sofia airport. The distance between Sofia and Bansko is about 160 km and the road takes about 2 hours and half. Most of the way is a fast motorway that passes through beautiful mountain landscapes, so time goes unnoticed while you enjoy the mountains and beautiful valleys.

You can also get from Sofia to Bansko by bus from Central Bus Station or by train from Central Railway Station.