Plan a summer holiday in Balchik? Do not forget to book private transfer Burgas to Balchik in advance. We offer airport transfer service for any company at the best prices.

Why to book private transfer from Burgas airport to Balchik with Iksam:

Why is a private airport transfer from Burgas to Balchik a better choice than a shuttle, taxi or public transport?

When you book airport transfer to Balchik with Iksam Travel, our driver will be waiting for you at the airport with nameplate, he will help you with the luggage and drive directly to your address. If your flight is delayed or baggage claim take long time, he will wait you. You do not need to wait for anyone, as happens with a shuttle transfer. Also you can stop for refreshments on the way.

There is no need to hurry to the station so as not to miss the bus to Balchik or to wonder which taxi to take in order for the driver to be reliable. We provide you transportation from Burgas airport to Balchik with new and comfortable vehicles. Our drivers are English-speaking, experienced, professional, punctual and courteous. 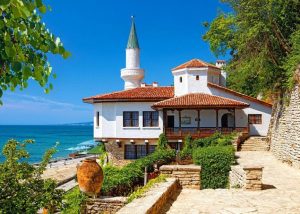 Balchik is a Black Sea coastal town and a seaside resort in the Southern Dobruja area of north-eastern Bulgaria. It is located in Dobrich Province, 35 km southeast of Dobrich and 42 km northeast of Varna. The town sprawls scenically along hilly terraces descending from the Dobruja plateau to the sea. It is often called “The white city” because of the white colour of the hills. Interesting sights in Balchik are the architectural and park complex “Balchik Palace”, consisting of a complex of villas, built in the period 1924 – 1934 as a summer residence of the Romanian Queen Maria of Edinburgh in the southernmost point of the newly occupied lands and established in 1955. by Academician Daki Yordanov Botanical Garden, which extends today to an area of 194 acres.

How far is Balchik from Burgas?

Balchik is about 180 km from Burgas Airport.
Check the exact distance and time from Burgas to Balchik.

How do I get from Burgas to Balchik?

There are several options how to get from Burgas to Balchik: