Holiday in Nessebar are a wonderful opportunity to combine a beach holiday with walks in the Old Town. Do not forget to book private airport transfer service from Burgas airport or Varna airport to Nessebar. We offer Nessebar airport transfer for any company at the best prices.

Why to book Nessebar Airport Transfer with Iksam:

What we know about Nessebar:

Nessebar  is an ancient and picturesque town one of the most visited resort towns in Bulgaria. Initially, the city was called Messembria or Mesembria, which means “the city of Melsa”, in memory of the legendary founder Melsa, the leader of the first settlers. This legend is mentioned by the Roman historian and geographer Strabo in his encyclopaedia, written in the 1st century BC. In addition to tourists, who come here every year, there are about 13,000 local people. The city is divided into two parts: Old and New Nessebar. In the new part of the city live local people, also there are located residential complexes and hotels. Old town is a city-museum under the open sky.  In 1956 Nessebar is declared as a cultural and archaeological sites, and in 1983 was taken under the protection of UNESCO as a monument of world cultural heritage. 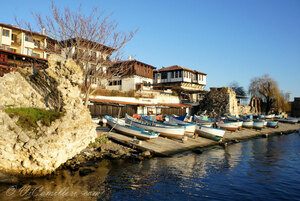 The old town of Nessebar is located on a rocky peninsula with a length of 850 m and a width of 350 m, connected with the land by a narrow isthmus with a length of about 400 m. In ancient times, the peninsula was almost 2 times larger, but the devastating earthquake not only destroyed the ancient buildings, but also plunged them into the water. Now from the city’s pier you can easily go on a boat trip. The old town of Nessebar is also called the “city of 40 churches” because it is the city with the largest number of churches in such a small area.