When your sea vacation is over and it’s time to go home, do not forget to book Nessebar to Sofia transfer in advance. We can provide you with a private door-to-door transfer service  directly to your accommodation and transport with new, comfortable cars and professional drivers for any company at the best prices.

Why to book private taxi from Nessebar to Sofia airport with Iksam:

Price for Nessebar to Sofia transfer

Why is a private airport taxi from Nessebar to Sofia a better choice than a shuttle, taxi or public transport?

When you book return airport transfer from Nessebar with Iksam Travel, our driver will be waiting for you in front of your hotel, he will help you with the luggage and drive directly to your address in Sofia. You do not need to wait for anyone and worry that you will be late for your flight, as happens with a shuttle transfer. Also you can stop for refreshments on the way.

There is no need to hurry to the station so as not to miss the bus from Nessebar to Sofia or to wonder which taxi to take in order for the driver to be reliable. We provide you transportation from Nessebar to Sofia airport with new and comfortable vehicles. Our drivers are English-speaking, experienced, professional, punctual and courteous. 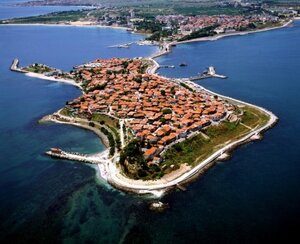 Nessebar  is an ancient and picturesque town one of the most visited resort towns in Bulgaria. Initially, the city was called Messembria or Mesembria, which means “the city of Melsa”, in memory of the legendary founder Melsa, the leader of the first settlers. This legend is mentioned by the Roman historian and geographer Strabo in his encyclopaedia, written in the 1st century BC. In addition to tourists, who come here every year, there are about 13,000 local people.

The city is divided into two parts: Old and New Nessebar. In the new part of the city live local people, also there are located residential complexes and hotels. Old town is a city-museum under the open sky.

In 1956 Nessebar is declared as a cultural and archaeological sites, and in 1983 was taken under the protection of UNESCO as a monument of world cultural heritage

How far is Sofia from Nessebar?

How do I get from Nessebar to Sofia?

There are several options how to get from Nessebar to Sofia: