When your vacation is over and it’s time to go home. Do not forget to book private Obzor to Varna transfer in advance. We can provide you with a private door-to-door transfer directly to your accommodation and transport with new, comfortable cars and professional drivers any company at the best prices.

Why to book private taxi from Obzor to Varna airport with Iksam:

Why is a private airport taxi from Obzor to Varna a better choice than a shuttle, taxi or public transport?

When you book return airport transfer from Obzor with Iksam Travel, our driver will be waiting for you in front of your hotel, he will help you with the luggage and drive directly to your address in Varna. You do not need to wait for anyone and worry that you will be late for your flight, as happens with a shuttle transfer. Also you can stop for refreshments on the way.

There is no need to hurry to the station so as not to miss the bus from Obzor to Varna or to wonder which taxi to take in order for the driver to be reliable. We provide you transportation from Obzor to Varna airport with new and comfortable vehicles. Our drivers are English-speaking, experienced, professional, punctual and courteous. 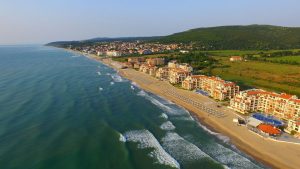 Obzor has the longest beach in Bulgaria – 14 km., located at the foot of Stara Planina. Near the town in the mountains there is a mineral spring. The history of the city began more than 3,000 years ago. It was created by the Thracians and was called Naulohas. In the 1st millennium BC. Greek settlers founded the city of Heliopolis (“sunny city”). After its conquest by the Romans, in the 1st century BC, a temple of Jupiter was built and the city was named Theopolis (“city of God”). Remains of this temple are preserved in the city centre. Later, it was the summer residence of the Byzantine emperors. In the 70s of the twentieth century in the centre of the city was discovered a monumental three-nave basilica from the V century with a wall thickness of 2 meters and a length of 40 meters, which in the following years was destroyed by new construction. After a while the Bulgarian fortress Kozyak was built. During the Ottoman Empire, the settlement of Gözeken (“overview” in Turkish) emerged on this territory. It bears its current name since 1936. Since September 7, 1984, Obzor has had the status of a city.

How far is Varna from Obzor?

Varna Airport is about 65 km from Obzor.
Check the exact distance and time from Obzor to Varna.

How do I get from Obzor to Varna?

There are several options how to get from Obzor to Varna: