If you choose to have a holiday in Bulgarian old capital city Veliko Tarnovo, you will need private Plovdiv to Veliko Tarnovo transfer. We can provide you with a private door-to-door transfer directly to your accommodation and transport with new, comfortable cars and professional drivers at the best prices.

Why to book private transfer from Plovdiv to Veliko Tarnovo with Iksam:

Why is a private airport transfer from Plovdiv to Veliko Tarnovo a better choice than a shuttle, taxi or public transport?

When you book airport transfer to Veliko Tarnovo with Iksam Travel, our driver will be waiting for you at the airport with nameplate, he will help you with the luggage and drive directly to your address. If your flight is delayed or baggage claim take long time, he will wait you. You do not need to wait for anyone, as happens with a shuttle transfer. Also you can stop for refreshments on the way.

There is no need to hurry to the station so as not to miss the bus to Veliko Tarnovo or to wonder which taxi to take in order for the driver to be reliable. We provide you transportation from Plovdiv airport to Veliko Tarnovo with new and comfortable vehicles. Our drivers are English-speaking, experienced, professional, punctual and courteous.

Veliko Tarnovo is one of the oldest settlements in Bulgaria, with a history of more than five millennia. The first traces of human presence, dating from the 3rd millennium BC, were discovered on Trapezitsa Hill. Also called the “City of Kings”, Veliko Tarnovo is located on the Yantra River and is known as the historic capital of the Second Bulgarian Empire, attracting many tourists with its unique architecture.

Veliko Tarnovo, originally Tarnovgrad, grew quickly to become the strongest Bulgarian fortification and most prosperous city during the second half of the High and the Late Middle Ages and also most important political, economic, cultural and religious centre of the empire. In the 14th century, the city was described by Bulgarian cleric Gregory Tsamblak as “a very large city, handsome and surrounded by walls, with 12,000 to 15,000 inhabitants”, the fortress of Tsarevets being the primary fortress and strongest bulwark from 1185 to 1393, housing the royal and the patriarchal palaces. 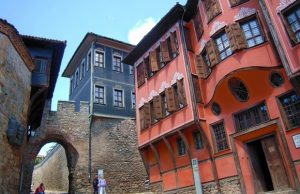 How far is Veliko Tarnovo from Plovdiv?

How do I get from Plovdiv to Veliko Tarnovo?

There are several options how to get from Plovdiv to Veliko Tarnovo: