Plan a holiday in Pravets ? You will need Pravets Resort Transfer. We can provide you transfer service directly to your accommodation and transport with new, comfortable cars and professional drivers for any company at the best prices.

What we know about Pravets: 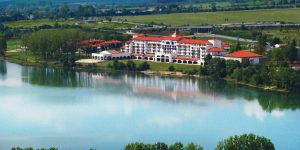 Pravets is a small town located 11 km from the town of Botevgrad, 50 km north-east of Sofia. The population of the town of Pravets is only 2500 people. The city is surrounded by forest and beautiful slopes of the Stara planina mountains. Near the town there is a large artificial lake, which offers conditions for a variety of water sports and fishing. Pravets is located at an altitude of 420 m above sea level. The winter is mild and the summer is cool, which is why Pravets is a suitable place for recreation all year round.

Pravets is the hometown of the former Prime Minister of Bulgaria, Todor Zhivkoy. The region is known for its traditional architecture and cultural heritage. On the way to the city of Etropole, 3-10 km from Pravets, there are the monasteries of St. Theodore Triton and the Etropolis monastery. The famous Glozhensky monastery is located 45 km from Pravets.