Why to book private transfer from Sofia to Dobrinishte with Iksam:

Why is a private airport transfer from Sofia to Dobrinishte a better choice than a shuttle, taxi or public transport?

When you book airport transfer to Dobrinishte with Iksam Travel, our driver will be waiting for you at the airport with nameplate, he will help you with the luggage and drive directly to your address. If your flight is delayed or baggage claim take long time, he will wait you. You do not need to wait for anyone, as happens with a shuttle transfer. Also you can stop for refreshments on the way.

There is no need to hurry to the station so as not to miss the bus to Dobrinishte or to wonder which taxi to take in order for the driver to be reliable. We provide you transportation from Sofia airport to Dobrinishte with new and comfortable vehicles. Our drivers are English-speaking, experienced, professional, punctual and courteous. 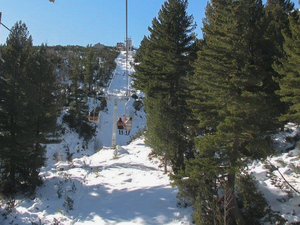 Dobrinishte is one of the first ski resorts in Eastern Europe with 14 km of ski slopes. Winter events and competitions are regularly held here, organized by the local municipality. The ski area in Dobrinishte is suitable for trekking, mountain and skiing trips. Unlike neighboring Bansko, the tracks are not very busy here, but are cheaper. The Dobrinishte Ski Center provides four ski slopes that are suitable for beginners as well as intermediate and advanced skiers and snowboarders. A distinctive feature of the resort is the lack of wide ski tracks.

Summer in Dobrinishte is a fairy tale in the beautiful Pirin. Four hikes start from Bezbog hut. There is still no tourist who returns from a walk to Popovo Lake, Bezbog Peak, Polezhan or any other point and has not been fascinated by the magic of the mountain.  Dobrinishte is a spa resort with seventeen mineral springs, the water temperature of which reaches 30-40 ° C. There are two pools with mineral water in the city. You can combine two directly opposite pleasures: skiing and taking healthy mineral baths.

How far is Dobrinishte from Sofia?

How do I get from Sofia to Dobrinishte?

There are several options how to get from Sofia to Dobrinishte: