Plan a summer holiday in Golden Sands? Do not forget to book private Varna to Golden Sands transfer in advance. We offer airport transfer for any company at the best prices.

Why to book private transfer from Varna airport to Golden Sands with Iksam:

Why is a private airport transfer from Varna to Golden Sands a better choice than a shuttle, taxi or public transport?

When you book airport transfer to Golden Sands with Iksam Travel, our driver will be waiting for you at the airport with nameplate, he will help you with the luggage and drive directly to your address. If your flight is delayed or baggage claim take long time, he will wait you. You do not need to wait for anyone, as happens with a shuttle transfer. Also you can stop for refreshments on the way.

There is no need to hurry to the station so as not to miss the bus to Golden Sands or to wonder which taxi to take in order for the driver to be reliable. We provide you transportation from Varna airport to Golden Sands with new and comfortable vehicles. Our drivers are English-speaking, experienced, professional, punctual and courteous. 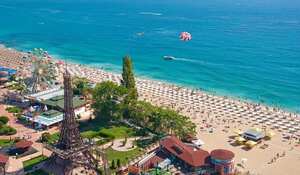 Golden Sands resort is located 460 km from Sofia and 18 km from Varna in the national park of Bulgaria – Golden Sands. The coastal strip in Golden Sands is a wide (sometimes up to 100 m) sandy beach with golden sand of exceptional purity, to which the resort owes its name. The territory on which the Golden Sands resort is located is declared a National Park. Golden Sands is a resort perfect for people of any age. Regardless of whether you came here alone, with your loved one, with your family, with a group of tourists, children or pensioners – here everyone will find what he is looking for. The resort has a wide selection of hotels, small pensions, individual apartments and rooms.
Golden Sands is the winner of a “Blue Flag” – a prestigious international award for environmentally clean resorts. The major microbiological, physical and chemical readings of the atmosphere, sea and sand are monitored monthly. The clean and calm waters of the sea with low salinity lower than that of the Mediterranean for example, and the absence of fish and animals dangerous to human health, are ideal for scuba diving and vacationing with children.

How far is Golden Sands from Varna?

How do I get from Varna to Golden Sands?

There are several options how to get from Varna to Golden Sands: