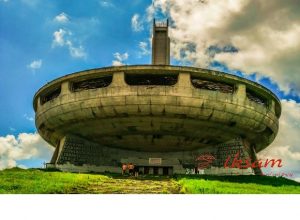 At the top of Hadji Dimitar (or its old name Buzludja) in the center of the Old Planina is the largest ideological monument of the totalitarian communist regime in Bulgaria. The building was built in the 70s and served as the headquarters of the Bulgarian Communist Party until the fall of communism in 1990.

The monument consists of a sacrificial tray and columns, symbolizing an expanded flag and a wreath in honor of the Bulgarian Communist Party. The monument on the top of Mount Hadji Dimitar was built near the geographical center of the country. In the star at the top are installed lighting bodies with a power of 150 kW and it was assumed that the light from them can be seen from the Romanian coast of the Danube, and at night and in clear weather – from the coast of the White Sea.

The construction of the monument on Buzludja mountain was realized by the efforts of the whole people. Work on its construction began in 1974, and its construction involved more than 600 soldiers, students and artisans. Workers blasted the top with dynamite to lay the foundation and export more than 70,000 tons of concrete to the top of the mountain.

After political changes in Bulgaria since November 1989, the monument is not supported. The building begins to crumble, glass, mosaic, ornaments and other elements of the monument’s construction explode. The Great Star is fired at with firearms to rob rubies, of which it was believed to have been built.

Today, the building offers a wonderful panoramic view of the Balkans, and above the entrance you can still see working slogans, and on the walls of the monument – bright graffiti.