If you visit Bulgaria, to have day tour to Boyana Church and Sofia sightseeing is a must to do. Sofia is one of the oldest European capitals that keep a lot of interesting places to have a perfect day tour. Further from all that you can see in Sofia, you have the opportunity to visit one of the most visited places in Bulgaria – Boyana Church. Medieval shrine stands at the foot of Vitosha Mountain, 8 km from Sofia. It retains unique frescoes that attract tourists from all over the world.

Pick up: tour can start from any address in Sofia.
Tour Duration: 3 to 7 hours. Depends on the number of stops and time spent at attractions.
Price: from €60 for a group for up to 4 people. Will vary depending on your chosen vehicle type, number of passengers. Price you can check in the table below.
Accepted payment methods: cash.

Why to book day tour to Boyana Church and Sofia sightseeing with Iksam:

Prices for day tour to Boyana Church and Sofia sightseeing

Price for day tour to Boyana Church and Sofia sightseeing

About Sofia and Boyana Church 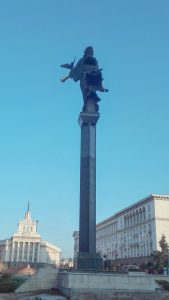 Sofia is the capital of Bulgaria, the largest city in the country. Located in the west of the country near the Sofia Valley and at the foot of Vitosha Mountain, the city is home to more than 1 million 250 thousand people. The city’s average altitude is 550 meters above sea level, the climate is moderate and continental, characterised by cold winters and relatively cool summers. The average temperature in January is 1 degree below zero Centigrade, and the average July temperature is 20 degrees Centigrade.

Interesting tourist attractions are Settlement Serdika in the centre of the city, the Cathedral of Alexander Nevsky, church Sveta Nedelya, the Banya Bashi Mosque, Turkish baths, the National History Museum, Russian Church, Sofia Synagogue, the walking-street Vitoshka. There are also many museums and galleries with collections of works of art. And for those looking for peace and quiet, you can take the lift to Vitosha Mountain. There are many good  places for picnics, walks in summer, and in winter for skiing.

Boyana Church or the Church of St. Panteleimon. A small, but interesting temple, at the foot of the Vitosha Mountain near Sofia. The Boyana Church is a UNESCO World Heritage Site since 1979. The Boyana Church consists of three buildings of different periods. The first building date from the XI century, the next – XIII, and the last wing was completed in the XIX century.

The first building is the oldest – is a small domed church built according to local traditions. The second building is a two-storey one, it fits tightly to the western facade of the old church and is connected with it in style. On the ground floor is the tomb of Kaloyan and his wife Desislava, and on the second floor is the family chapel. Outside the church is decorated with ceramics. Third, the most western part of the church is a later addition to the nineteenth century.

The Boyana Church gained world fame thanks to the unique murals from 1259 – the work of an unknown icon painter of the second Bulgarian kingdom (12-14 centuries). It is one of the most valuable collections of medieval painting.