Have you heard about the Bulgaria’s communist UFO? The worldwide famous abandoned communist Buzludzha Monument takes the 25th place in the international ranking “The most beautiful abandoned places in the world”. Day Tour to Buzludzha Monument  and Shipka is your chance to visit sanctity of the Bulgarian Communist Party. In addition, you can see Shipka Memorial and Shipka Memorial Church – a memorial to those who died for the liberation of Bulgaria. Also you will visit The Thracian Tomb of Kazanlak – it is one of the most elaborate tombs in the Valley of the Thracian Rulers.

Pick up: tour can start from any address in Sofia.
Tour Duration: 8 to 10 hours. Depends on the number of stops and time spent at attractions.
Price: from €180 for a group for up to 4 people. Will vary depending on your chosen vehicle type, number of passengers. Price you can check in the table below.
Accepted payment methods: cash.

Why to book day tour to Buzludzha and Shipka with Iksam:

Price for day tour to Buzludzha and Shipka

About Buzludzha and Shipka

At the top of Hadzhi Dimitar (or its old name Buzludzha) in the centre of the Old Planina is the largest ideological monument of the totalitarian communist regime in Bulgaria. The construction was built in the 70-s and served as the headquarters of the Bulgarian Communist Party until the fall of communism in 1990.

The monument consists of a sacrificial tray and columns, symbolising an expanded flag and a wreath in honour of the Bulgarian Communist Party. The monument on the top of mount Hadzhi Dimitar was built near the geographical centre of the country. In the star at the top are installed lighting bodies with a power of 150 kW and it was assumed that the light from them can be seen from the Romanian coast of the Danube, and at night and in clear weather – from the coast of the White Sea. The construction of the monument on Buzludzha mountain was realised by the efforts of the whole people. Work on its construction began in 1974, and its construction involved more than 600 soldiers, students and artisans. Workers blasted the top with dynamite to lay the foundation and export more than 70,000 tons of concrete to the top of the mountain.

After political changes in Bulgaria since November 1989, the monument is not supported. The building begins to crumble, glass, mosaic, ornaments and other elements of the monument’s construction explode. The Great Star is fired at with firearms to rob rubies, of which it was believed to have been built.

Today, the building offers a wonderful panoramic view of the Balkans, and above the entrance you can still see working slogans, and on the walls of the monument – bright graffiti. 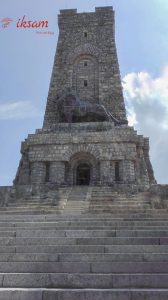 Shipka Monument of The Liberty is part of the Shipka National park-museum, which is located on the Shipka peak (1326 m). It is located 28 km from Kazanlak and 240 km from Sofia. It represents restored positions, batteries and dugouts of the Shipka warriors during the Russian-Turkish war of 1877-78. The Freedom Shipka Monument is the largest among the monuments in the park. His silhouette is similar to the medieval Bulgarian fortress and is visible from many kilometres. The monument was built on voluntary donations of the Bulgarian people and opened on August 26, 1934. The height of the monument is 31.5 m and 890 steps lead to it. The entrance of the monument is guarded by a large bronze lion – a symbol of Bulgaria. The monument consists of several floors where the marble sarcophagus with the bones of Shipka’s defenders, the personal belongings of warriors, medals, photographs, weapons and documents related to the battles at Shipka are preserved. On the top floor there is a viewing platform, which offers a beautiful panoramic view. 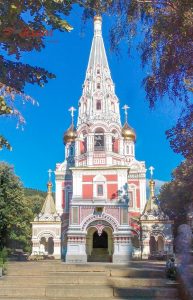 The funds for the construction of the temple were raised by donations from people in Russia and Bulgaria. The initiator for its construction was by Count Nikolay Ignatiev and Olga Skobeleva, the mother of the Russian war hero Gen. Major Michael Skobelev. The construction began in 1885 and was completed in 1902 under the guidance of Russian architects.

The temple was officially opened on September 27, 1902 in the presence of Russian army generals and many honourable guests. The huge bells, the largest of which weigh 12 tons, are made from the cartridges that were collected in the area. The opening and consecration of the temple coincided with the 25th anniversary of the Shipka Battle in July-September 1877.

Initially, the entire monastery was Russian property, but in 1934 it was granted by the Soviet government to Bulgaria for eternal times. In 1970 the monument was declared a historical monument of culture and later became part of the historical and architectural reserve “Shipka-Buzludzha”. 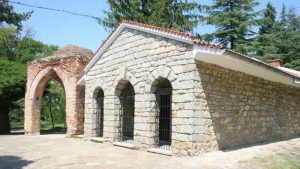 The Thracian tomb in Kazanlak is a stone round domed tomb, which is located in Kazanlak and is part of a large necropolis located near the ancient capital of the Odrysian kingdom of Sevtopolis. It dates from the late 4th century BC. – the beginning of the 3rd century BC. and since 1979 has been on the UNESCO World Heritage List.

The tomb belonged to the Thracian ruler Roygos. It was discovered accidentally on April 19, 1944 by soldiers who were digging a trench in the northeastern part of Kazanlak. The soldiers came across a masonry stone wall. Curiosity led them to break it, then they entered a low and narrow corridor, where there was a fallen rectangular granite slab, and from there in a round vaulted room. Realising that they had discovered something important, they called an archaeologist and he confirmed their assumptions. Thus, a remarkable monument from the early Hellenistic era was discovered in Bulgaria.

In 1946 into tomb was built-in a special protective building, which in. In 1961 it was equipped with an air conditioning system to provide the necessary conditions for storage of the murals. In 1979 it was included in the World Heritage List of the Convention Concerning the Protection of the World Cultural and Natural Heritage.

In order to preserve the frescoes, access to the original Kazanlak tomb is strictly limited. The nearby tomb-spear is accessible for visits.

Other tours from Sofia: