Rupite is a place in Bulgaria that everyone must visit, no matter for what reason: whether it is Vanga’s predictions, healing mineral waters or the desire to find yourself in a place where earlier was volcano Kozhuh. There are many reasons that make Rupite an extraordinary place. One of them is the strong (cosmic) energy, which is felt here. Not far from from there is the smallest town in Bulgaria – Melnik, located in a picturesque area. It is known for its magnificent Renaissance architecture and natural phenomena. Beautiful natural paintings reign everywhere in this area – a true paradise on earth and you can enjoy them on day tour to Melnik and Rupite.

Pick up: tour can start from any address in Sofia.
Tour Duration: 8 to 10 hours. Depends on the number of stops and time spent at attractions.
Price: from €170 for a group for up to 4 people. Will vary depending on your chosen vehicle type, number of passengers. Price you can check in the table below.
Accepted payment methods: cash.

Why to book day tour to Melnik and Rupite with Iksam:

Prices for day trip to Melnik and Rupite

Price for day tour to Melnik and Rupite

Book tour to Melnik and Rupite:

About Melnik and Rupite: 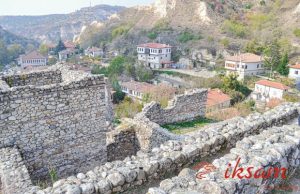 First written evidence of the city dates back to the beginning of the 9th century. It is believed that the Thracian tribes of Medi settled first in this area, then the Romans settled the area, as evidenced by the ancient Roman bridge, which has survived to the our days. Subsequently, the territory was inhabited by Slavs. From them came the modern name of the city Melnik. The name comes from the Slavonic words “mel” – chalk, which in turn came from the white rocks that surround the city. The biggest flourishing of the city was in the era of the Bulgarian Renaissance in the 18th century. The city develop, thriving, local population grow. The city conducts trade with all Europe, especially Melnik wine is famous. Since that time, the most significant historical monuments of the city have been preserved – Pashov House (now the city’s historical museum), Kordopulov House.

Another interesting place is the Metropolitan Church “St. Nikolai ”,  are preserved only the eastern part of the wall and several elements of the interior of the church. Also nearby are the Melnik Pyramids – a unique natural formation, obtained by the erosion of clay soils.

Among the huge number of mysterious and mystical places of our planet, there is one that became famous thanks to the gift of foresight of the world famous prophetess Vanga. Rupite is a picturesque area located just 10 km from Petrich on the banks of the Struma River, next to the extinct volcano Kozhukh.

This area is associated with the prophetess Vanga. According to the prophetess, the key to the mysteries of the past is in the volcano. She called the Rupite a source of her strength and energy. Vanga spent her last years in this area in a modest house, and next to it is builded the temple “St. Petka”.  Inside you can see the non-standard icons, painted by the famous artist Prof. Svetlin Rusev. They portray saints with realistic images that do not appeal to the church canon. In the courtyard of the temple is the grave of Baba Vanga, where believers pray for salvation.  Also, the area of Rupite is famous for its healing mineral springs and white poplar forests.

In the name of Rupite is named Rupite glacier on the island Smith, Antarctica.

Other tours from Sofia: