Not far from the town of Belogradchik is one of the largest and most beautiful caves in Bulgaria – Magura (Rabishskaya cave). Located in a limestone hill, consists of a large main gallery and three deviations. The total length of all the labyrinths discovered is approximately 2600 m, but tourists can see only  1750 m. The most famous feature of the cave is retains rock paintings of various epochs: epipaleolithic, Neolithic, Eneolithic, the beginning of the Early Bronze Age. 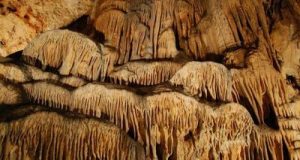 In the cave is still inhabited. In it, of course people no longer live, but some of the halls are used to store wine, as the temperature in the cave is 12 degrees a year.