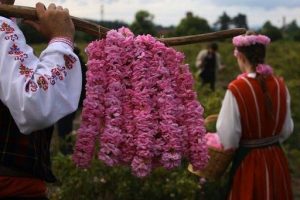 “The Queen Rosa” Contest-spectacle is a spectacle of the most beautiful and charming Kazanlak graduates who are part of the city’s pride and emblem. 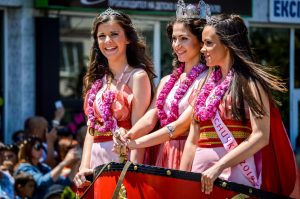 Traditionally, it open the Rose Festival. The performance is the most awaited event in Kazanlak for the year and gathers the most emotion of viewers and guests. Since 2013, the rights for the selection of Rose Queen has been patented and is only a right of Kazanlak Municipality. Annually selected Queen Rose attends various forums in the twin cities of Kazanlak on the different continents and is a beautiful ambassador of Bulgaria around the world. He also leads the festive carnival procession, which is the culmination of the Rose Festival, on the first Sunday of June. She crowns with a unique crown, made by the jeweler Lyubomir Dudev. He is also the author of the attractive jewelery that adorns Rose Queen. 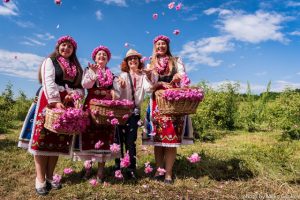 Harvesting roses and ritual of production of rose oil is the annual central event for the official guests and foreign tourists during the culmination Sunday of the age-old Rose Festival in Kazanlak. People who collect roses are in folk costumes, authentic folklore groups, kukeri and dance groups present the rose gardens and welcome guests to the holiday. In the fertile pink gardens of the villages of Rajena, Kanchevo, Rozovo, Gorno Izvorovo, Gorno Cherkovishte and Kazanlak, invite guests to get the flower of the gods – the oil-bearing Kazanluk Rose, to taste rose jam, gulovitsa and rose liqueur. 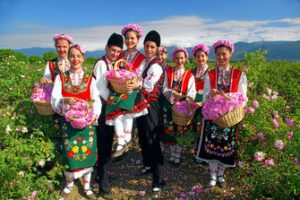 Then, from the rose garden holiday is transferred to the central square. More than 5,000 participants in a colorful carnival line pass on the streets of Kazanlak, depicting different moments in the history and culture of the Rose Valley.

Program of the Festival of Roses in 2019 can be found on the official festival website.

*for prices from other locations fill in the contact form

Book your transfer to The Rose Festival: