Plan a summer holiday in Kiten? Do not forget to book private Varna to Kiten transfer in advance. We offer airport transfer for any company at the best prices.

Why to book private transfer from Varna airport to Kiten with Iksam:

Why is a private airport transfer from Varna to Kiten a better choice than a shuttle, taxi or public transport?

When you book airport transfer to Kiten with Iksam Travel, our driver will be waiting for you at the airport with nameplate, he will help you with the luggage and drive directly to your address. If your flight is delayed or baggage claim take long time, he will wait you. You do not need to wait for anyone, as happens with a shuttle transfer. Also you can stop for refreshments on the way.

There is no need to hurry to the station so as not to miss the bus to Kiten or to wonder which taxi to take in order for the driver to be reliable. We provide you transportation from Varna airport to Kiten with new and comfortable vehicles. Our drivers are English-speaking, experienced, professional, punctual and courteous. 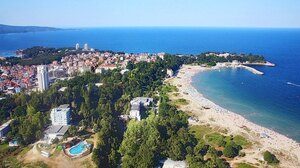 The resort town Kiten is located in the south of the Bulgarian Black Sea coast, 70 km from Burgas Airport, near the mouth of the Karagach River. The average temperature in July there is 23-24 ° C, and one of the advantages of the town is a unique combination of sea and mountains (Strandja). Another wealth is two beautiful sea gulfs – Karaagach and Atliman and extensive beaches. The north beach, known as Atliman, is located in the depths of the bay of the same name and includes beautiful sand dunes. The southern bay of Urdoviza is divided into two beaches – Kiten South and Camping Kiten.

Also the Ropotamo Nature Reserve is nearby, and offer interesting boat trips along the mouth of the Ropotamo River.
The Karaagach River, which flows into the sea near Kiten, is rich in fish and is a favourite place for vacationers in the resort fishing enthusiasts.

How far is Kiten from Varna?

Kiten is about 185 km from Varna Airport.
Check the exact distance and time from Varna to Kiten.

How do I get from Varna to Kiten?

There are several options how to get from Varna to Kiten: