Plan a summer holiday in Lozenets ? Do not forget to book private Varna to Lozenets transfer in advance. We offer airport transfer for any company at the best prices.

Why to book private transfer from Varna airport to Lozenets with Iksam:

Why is a private airport transfer from Varna to Lozenets a better choice than a shuttle, taxi or public transport?

When you book airport transfer to Lozenets with Iksam Travel, our driver will be waiting for you at the airport with nameplate, he will help you with the luggage and drive directly to your address. If your flight is delayed or baggage claim take long time, he will wait you. You do not need to wait for anyone, as happens with a shuttle transfer. Also you can stop for refreshments on the way.

There is no need to hurry to the station so as not to miss the bus to Lozenets or to wonder which taxi to take in order for the driver to be reliable. We provide you transportation from Varna airport to Lozenets with new and comfortable vehicles. Our drivers are English-speaking, experienced, professional, punctual and courteous. 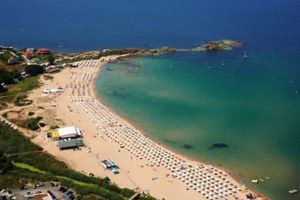 Lozenets is a typical fishing village, providing fresh fish and fish delicacies for local restaurants. The proximity of Strandzha Mountain makes it an even more fascinating and unique place to relax. You do not need to choose whether to go to the mountains or the sea, but just visit Lozenets. The village is small, neat and cosy. The two-storey and three-storey houses and villas prevail, turned into comfortable small hotels or providing accommodation for the vacationers. It is dotted with lots of greenery. It combines mountain and sea climate. Average summer temperatures vary between 22 – 25 ° C for the months of June and September and between 26 – 31 ° C for July and August. Measurements show that the sea water in the resort village is the cleanest on the Bulgarian Black Sea coast, and the presence of useful trace elements such as magnesium, calcium, iodine, bromine and others. are highly appreciated by professionals from all over the world.

How far is Lozenets from Varna?

Lozenets is about 190 km from Varna Airport.
Check the exact distance and time from Varna to Lozenets.

How do I get from Varna to Lozenets?

There are several options how to get from Varna to Lozenets: