Plan a summer holiday in Primorsko? Do not forget to book private Varna to Primorsko transfer in advance. We offer airport transfer for any company at the best prices.

Why to book private transfer from Varna airport to Primorsko with Iksam:

Why is a private airport transfer from Varna to Primorsko a better choice than a shuttle, taxi or public transport?

When you book airport transfer to Primorsko with Iksam Travel, our driver will be waiting for you at the airport with nameplate, he will help you with the luggage and drive directly to your address. If your flight is delayed or baggage claim take long time, he will wait you. You do not need to wait for anyone, as happens with a shuttle transfer. Also you can stop for refreshments on the way.

There is no need to hurry to the station so as not to miss the bus to Primorsko or to wonder which taxi to take in order for the driver to be reliable. We provide you transportation from Varna airport to Primorsko with new and comfortable vehicles. Our drivers are English-speaking, experienced, professional, punctual and courteous. 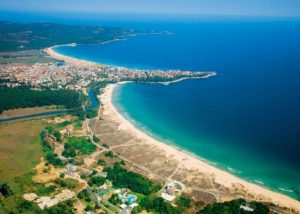 Primorsko is located 52 km south of Burgas and 442 km southeast of Sofia. Primorsko has a seaport and regular buses to resorts on the southern Black Sea coast. Primorsko, in fact, is a conservation area, with pristine forests, rare plants and wild animals, with interesting rock formations and a rich historical heritage of ancient civilizations. In the city itself there are many parks and alleys with broadleaf trees, beeches, oaks, famous for the fact that citrus fruits are grown here. Primorsko adjoins the Ropotamo nature reserve, which is spread at the mouth of the river of the same name, also called the “Bulgarian Amazon”. The reserve received its status in 1940 and since then has become one of the favourite national parks and a popular sightseeing place for tourists.

Another famous place in Primorsko is the Arkutino Botanical Garden. Arkutino, which means “bear’s swamp”, is located among a rare longose ​​forest (flooded, flooded forest) near the Ropotamo River. Here is an unusual swamp lagoon with fresh water, where herons, swans and turtles live. The main advantage of Arkutino is a population of beautiful water lilies. In addition to the traditional white and yellow lilies, a rare plant grows here – a water rose.

How far is Primorsko from Varna?

Primorsko is about 180 km from Varna Airport.
Check the exact distance and time from Varna to Primorsko.

How do I get from Varna to Primorsko?

There are several options how to get from Varna to Primorsko: