Plan a summer holiday in Ravda? Do not forget to book private Varna to Ravda transfer in advance. We offer airport transfer for any company at the best prices.

Why to book private transfer from Varna airport to Ravda with Iksam:

Why is a private airport transfer from Varna to Ravda a better choice than a shuttle, taxi or public transport?

When you book airport transfer to Ravda with Iksam Travel, our driver will be waiting for you at the airport with nameplate, he will help you with the luggage and drive directly to your address. If your flight is delayed or baggage claim take long time, he will wait you. You do not need to wait for anyone, as happens with a shuttle transfer. Also you can stop for refreshments on the way.

There is no need to hurry to the station so as not to miss the bus to Ravda or to wonder which taxi to take in order for the driver to be reliable. We provide you transportation from Varna airport to Ravda with new and comfortable vehicles. Our drivers are English-speaking, experienced, professional, punctual and courteous. 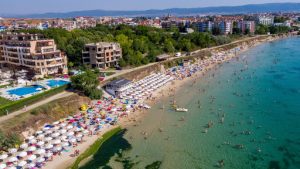 The village Ravda is located about 33 km beyond Burgas and 4 km in front of Nessebar. The close proximity of Ravda to such resort places as Nessebar, Sunny Beach, Sveti Vlas, Elenite and Aheloy is a premise for a varied vacation. In Nessebar, tourists can go in for cultural tourism, nearby is Sunny Beach, known for opportunities for entertainment. Lovers of diversity can change the beach every day. Communication between the resorts is carried out by regular transport in a short time.

As in all of Bulgaria, the climate of Ravda is mild. Many sunny days a year and a quiet calm sea made the village a favourite place for parents with children and for independent tourists who prefer a calm, measured rest. The air temperature in summer rises to + 30 ° C, and the temperature of sea water in high season can reach + 26 ° C. You can swim in the coastal waters of Ravda from April until October.

How far is Ravda from Varna?

Ravda is about 102 km from Varna Airport.
Check the exact distance and time from Varna to Ravda.

How do I get from Varna to Ravda?

There are several options how to get from Varna to Ravda: